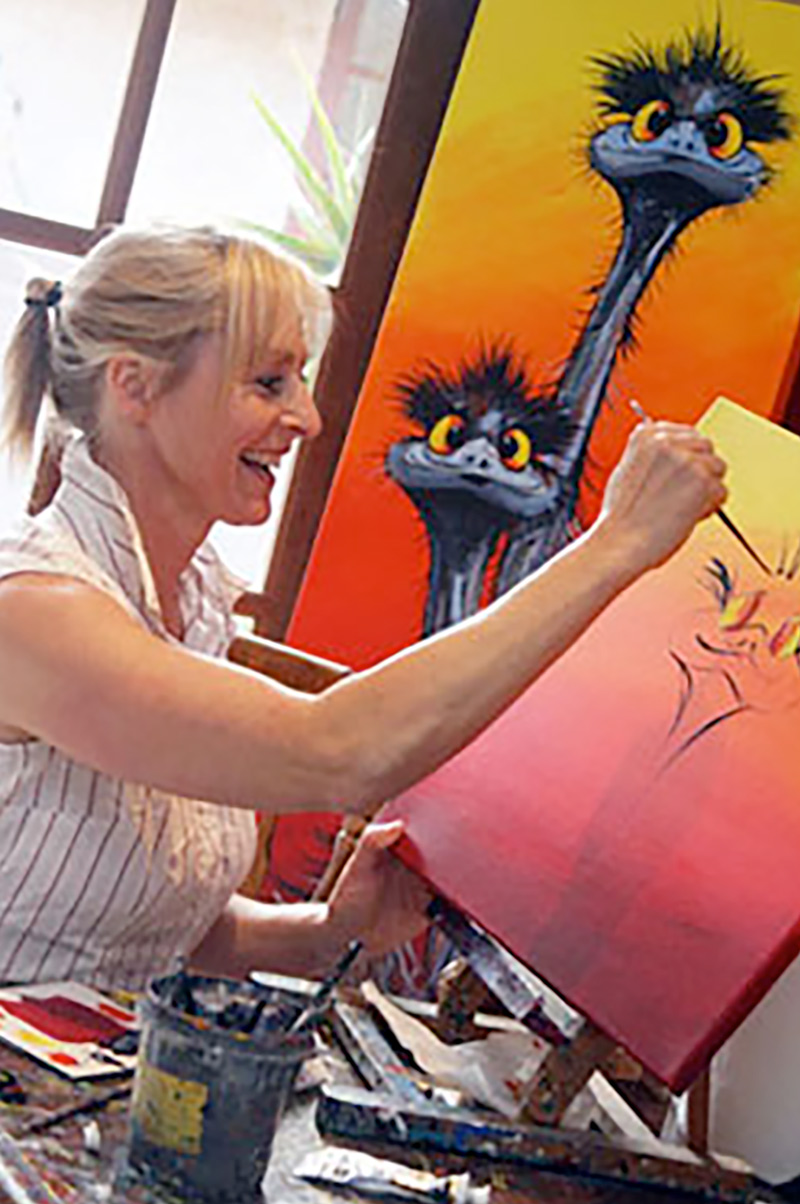 Showing all 8 results, including child brands

After her graduation with a BA in Art & Design from Curtin University in 1982 (majoring in ceramics), Wendy based herself and her business ‘Stunned Emu Designs’ in Fremantle, Western Australia. Initially she produced handmade and handpainted pottery, combining her interest in Australian wildlife with her art. She became well known for her brightly coloured terracotta pieces and quirky characters, particularly her trademark ‘emu with attitude’. Since opening a shop in the historic Fremantle Markets in 1995, Wendy has developed and extended her range of products to include mugs, stationery, books, prints, bags and her much sought after original paintings. Early in 2010, Wendy opened her own Gallery in South Terrace, Fremantle which has enabled her to extend her range even further and to display more of her original artwork including seascapes and landscapes.

The enthusiasm of children for her designs prompted Wendy to write her first children’s picture book, like ‘Where’s Stripey?’ it won two awards including the prestigious ‘Western Australia Premier’s Book Award’, Children’s Section.
Wendy has combined her love of the natural world with an interest in conservation and has been a volunteer on several conservation projects. She is actively involved in the ongoing work to save the endangered Western Ground Parrot and has spent time in Esperance and Albany (South Western Australia), surveying and monitoring their numbers.
Always ready for a challenge, Wendy’s largest piece of artwork to date was her life size cow she designed and painted for The Margaret River Cow Parade in 2010. Wendy’s cow ‘We didn’t do it’, showcasing her quirky emus was one of 87 painted by different artists and exhibited for 4 months in the Busselton, Margaret River and Augusta regions. At auction, Wendy’s cow sold for the highest amount of $18,000 and the proceeds went to cave conservation in the Margaret River region.

Filters
Close
Categories
Artist
Ruane Manning
George Riley
Hayley Gillespie
Howard William Steer
Judy Prosser
Melanie Hava
Renato Casaro
Wendy Binks
Price
Status
Close My Cart
Close Wishlist
Recently Viewed Close
Close
Close
Navigation
Categories
We use cookies on our website to give you the most relevant experience by remembering your preferences and repeat visits. By clicking “Accept All”, you consent to the use of ALL the cookies. However, you may visit "Cookie Settings" to provide a controlled consent.
Cookie SettingsAccept All
Manage consent

This website uses cookies to improve your experience while you navigate through the website. Out of these, the cookies that are categorized as necessary are stored on your browser as they are essential for the working of basic functionalities of the website. We also use third-party cookies that help us analyze and understand how you use this website. These cookies will be stored in your browser only with your consent. You also have the option to opt-out of these cookies. But opting out of some of these cookies may affect your browsing experience.
Necessary Always Enabled
Necessary cookies are absolutely essential for the website to function properly. These cookies ensure basic functionalities and security features of the website, anonymously.
Functional
Functional cookies help to perform certain functionalities like sharing the content of the website on social media platforms, collect feedbacks, and other third-party features.
Performance
Performance cookies are used to understand and analyze the key performance indexes of the website which helps in delivering a better user experience for the visitors.
Analytics
Analytical cookies are used to understand how visitors interact with the website. These cookies help provide information on metrics the number of visitors, bounce rate, traffic source, etc.
Advertisement
Advertisement cookies are used to provide visitors with relevant ads and marketing campaigns. These cookies track visitors across websites and collect information to provide customized ads.
Others
Other uncategorized cookies are those that are being analyzed and have not been classified into a category as yet.
SAVE & ACCEPT
Newsletter

Be the first to know about our new arrivals and receive 15% off when joining!